Tatsuike Primary School, which has been converted to the Kyoto International Manga Museum, was opened on November 1, 1869 as the 25th bangumi shogakko (district elementary school) of Kamigyo, one of a total of 64 administrative district-based elementary schools established in Kyoto. This was three years before the modern educational system was established in Japan (proclamation of the Education System Order in 1872). Tatsuike Primary School was built without the aid of grants from the Kyoto prefectural government and only with money (2,000 ryo) donated by residents of Tatsuike School District, who pinned their greatest hopes on education. From the time of its founding, Tatsuike Primary School played a leading role in education in Kyoto. However, due to the doughnut phenomenon (cavitation of downtown) and the decline in number of children in recent years, Tatsuike Primary School was merged with four other schools (Umeya, Chikkan, Fuyu and Kasuga) in April 1995 to form Gosho Minami Primary School. The Manga Museum is made up of three buildings, the main building (built in 1929), the north building (built in 1937), and the auditorium/gymnasium (built in 1928), renovated to form a connecting shape, but otherwise largely untouched, including the creaky corridors and tiled staircases, etc., allowing visitors to savor the beautifully extravagant architectural atmosphere of the Modernist era. 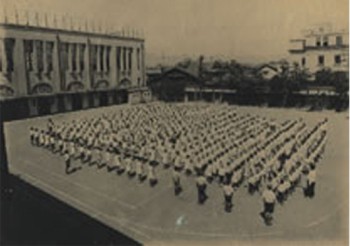 On the first floor of the former elementary school building that houses the museum, the principal's office has been preserved. From the window of this room one can gaze upon a courtyard beside the school ground, and in peaceful times a glimpse of the interior reveals an atmosphere calmer than in the corridor. In fact, a large clock still stands in this principal's office, which marked the passage of time in the era that children ran cheerfully through the schoolyard. Before Tatsuike Elementary School was remade into the Manga Museum the clock had stopped. But in accordance with the wishes of local community members, Eihima Osamu from Hyogo Prefecture, a firstclass clock-maker and artisan of clock repair (awarded the Ministry of Health, Labour and Welfare 'Contemporary Master Craftsman' Superior Workmanship Prize), was commissioned to undertake repairs and once again the pendulum was set into motion. When visiting the museum, take a peek into the principal's office to look at the historic clock, and let its ‘tick tock’ sound fill you with happiness. 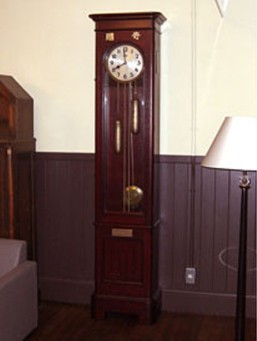 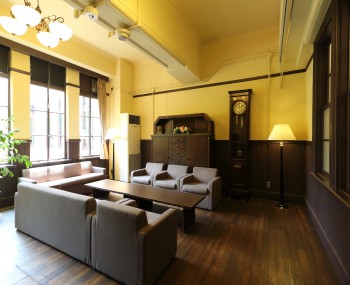 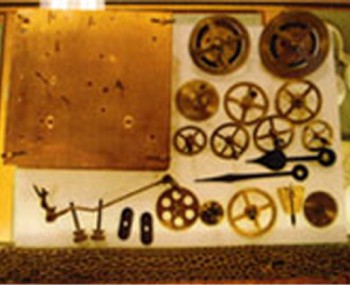