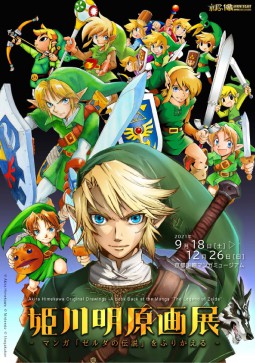 A Look Back at the Manga “The Legend of Zelda”

As a concurrent project of the ‘Kyoto International Manga Anime Fair 2021’ (aka: Kyo Mafu) we are pleased to present an exhibition of original artwork by Akira Himekawa, popular both in Japan and abroad for their manga adaptation of the Nintendo games ‘The Legend of Zelda’.

This exhibition brings together approximately 200 works including original manga artwork and color illustrations by Akira Himekawa, a manga artist duo who have been drawing manga adaptations of the Nintendo game ‘The Legend of Zelda’ since June 1999, when their manga ‘The Legend of Zelda: Ocarina of Time’ started serialization in Shogakukan’s school year magazines series.

Himekawa have won the hearts of many fans with their aesthetic expression reminiscent of the game, as well as their original stories and characters not found in the original. Please enjoy the abundant vitality of the characters, monsters, and animals in these artworks. 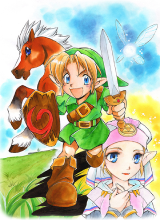 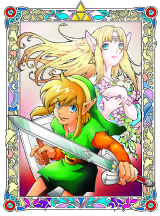 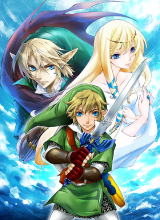 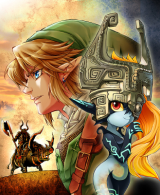 An exhibition catalog which can only be obtained at this museum, and other products specially created for this exhibition are on sale, featuring Link and the other characters from Himekawa’s manga ‘The Legend of Zelda’, including postcards and document sleeves patterned with key visuals from the manga.

About the Legend of Zelda

An action-adventure game series that began 30 years ago, when the first game ‘The Legend of Zelda’ was released in 1986. You play as Link, solving hidden mysteries across fields and dungeons as the adventure progresses.

The story spans multiple eras set in the kingdom of Hyrule, depicting the fate of Zelda, Ganondorf and the Triforce, and the heroic tale of Link.

Akira Himekawa is the pen name of a duo of manga artists Honda A and Nagano S. They started drawing manga together in 1987, and in 1991 won second place in the Shonen Sunday Comic Grand Prix with their debut work. Since then, they have continued to work together rotating the lead for each work while fusing the characteristics of their styles.
They specialize in depicting an atmospheric world and the ‘life force’ of the people animals and nature within.
In 2010, they won the German Sondermann Award for best International Manga for ‘The Legend of Zelda: Ocarina of Time’.
Their representative works include ‘The Legend of Zelda’ series, ‘Gold Ring’, ‘Gliding REKI’, ‘Seton Doubutsu-ki ( Wild Animals) ’, and ‘Nihon no rekishi (History of Japan) ’.

Western Japan’s largest manga and anime trade fair. Main exhibitors include various businesses and organizations, which aim to spread and boost the manga and anime industry and educational institutions. Each booth features a display of popular manga and anime series, many events, PR activities for brand-new collections, and special goods sales.

Free
* However, a General Admission ticket to the Museum is required
*On Friday Nov 5, admission to the museum is free because it is Kansai Culture Day.

*Due to the spread of COVID-19, the schedule and content of the exhibition and museum closure can change. Thank you for your understanding.
Category
Status
Archives
See more past exhibitions and events