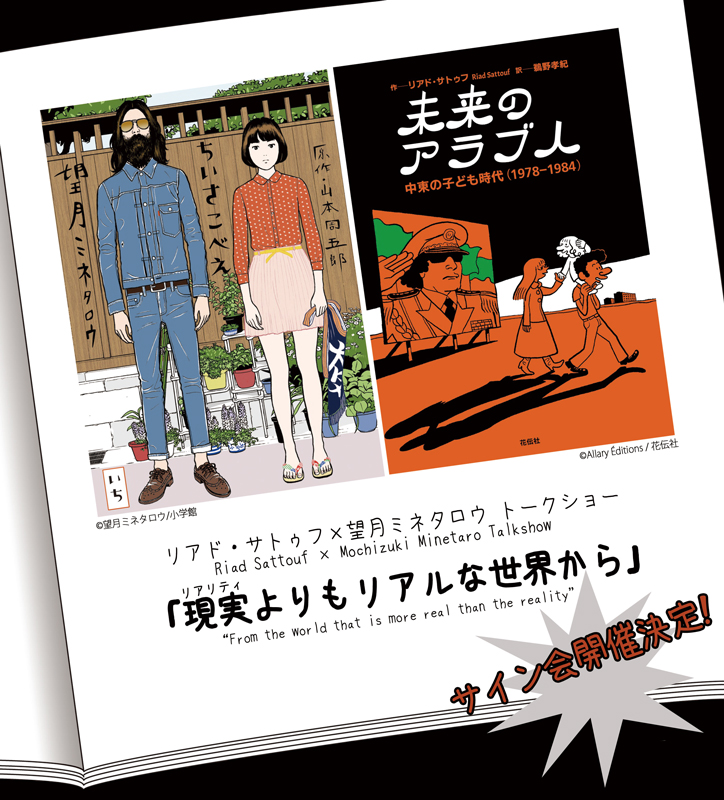 We are honored to hold a talk show event of Riad Sattouf, a bande déssinée (French comic) artist from France, and Mochizuki Minetaro, a manga artist from Japan. This event is going to be held as a part of ‘Feuilles d’automne 2019 (Weekend of bande déssinée in Kansai)’ organized by Institut Français (French Institute) Kansai.
*Event will be held in Japanese and French only.

<Notice>
The appearance of Mochizuki Minetaro has been canceled due to possible influences of the Typhoon 19. At this moment, we are planning to hold the event only with Riad Sattouf. However, in case of temporary closure of the museum because of the weather or circumstances that are related to transportation, the whole event could be canceled. We will immediately issue a notice on Twitter and the museum’s homepage if we decide to close the museum on that day. (Posted on October 10, 2019)
内容

Riad Sattouf is a movie director and French comic artist internationally known for L’Arabe du future (The Arab of the Future). Mochizuki Minetaro is a manga artist who is famous with works, such as Chiisakobe, not only in Japan but also in other countries because of his unique style.
These two artists will talk about the source of their inspiration and their works, which describe a more real world than the reality with simple lines.

About the autograph sessions

There will be autograph sessions of Riad Sattouf and Mochizuki Minetaro after the talk show for the first 80 arrivals who bought some of the two artists’ books at the museum shop and participated in the talk show.

Participation Please show your numbered ticket for the talk show to the museum shop staff when you buy some of the two artists’ books. Another ticket for the autograph session(s) will be given.

*Only one ticket for each artist’s autograph session will be provided to each participant.
*You can only get an autograph on the book that bought at the museum shop. It is not allowed to get it on other books or goods.
*You cannot get an autograph that is not addressed to someone. (pen names and nicknames are also acceptable)

Riad Sattouf
Born in France in 1978. In 2000, he debuted with Petit Verglas (Written by Éric Corbeyran). After that, he fascinated many fans with his works, such as Pascal Brutal, La Vie secrète des jeunes, L’Arabe du futur and more. He has gotten the Prize for Best Album of Angoulême International Comics Festival twice with Pascal Brutal (2010) and L’Arabe du futur (2015). Inarguably, he is a representative artist of today’s French comics. He is also actively working as a movie scenarist, an actor, and a movie director.

Mochizuki Minetaro
Born in Japan in 1964. He debuted in 1985 and started a manga series called Bataashi Kingyo in the same year, which brought him great success. His manga has a very unique style that cannot be found anywhere else and he has many fans because of it. His representative works, such as Bataashi Kingyo, Dragon Head and Samehada otoko to momojiri onna, were made into movies as well. He got the 21st Kodansha Manga Award and the 4th Tezuka Osamu Cultural Prize (Award for Excellence) with Dragon Head. He also received an Excellence Prize of the 17th Japan Media Arts Festival (Manga Awards) and Prix de la série from the Angoulême International Comics Festival in 2017 with Chiisakobe.

Uno Takanori
French language translator, interpreter, and manga coordinator.
He was an employee at a publishing company called “Tonkam” in Paris between 1995 and 2013. After that, he has been working on publishing projects of manga and French comics, and as a French language translator/ interpreter. His representative translation works are Gulliveriana (by Milo Manara), Hachimitsu iro no Jung (by Jung), Neko no Michel (by Leslie Plée) and Mirai no Arab-jin (by Riad Sattouf). He also co-translated Toma no shinzo (by Hagio Moto) and Tokyo Monogatari (by Takizawa Seiho) into French.