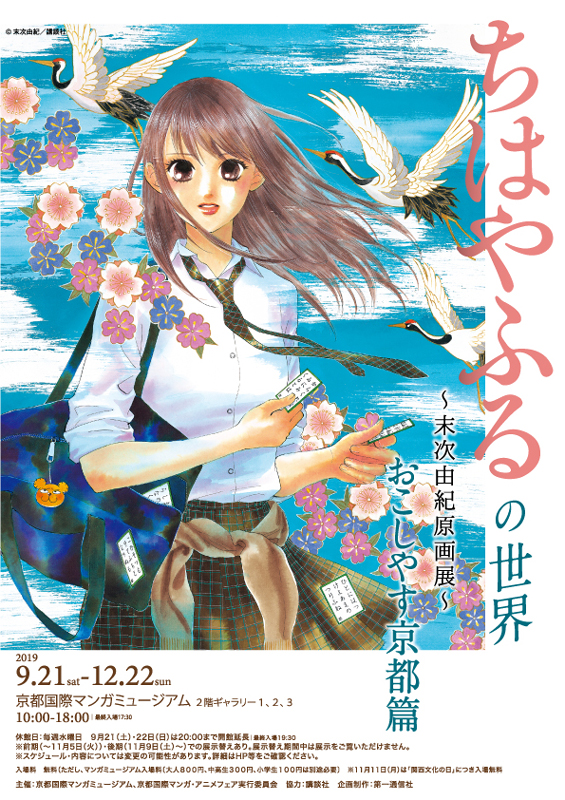 This exhibition showcases the beautifully colored and delicate artwork by manga artist Suetsugu Yuki drawn for the series “Chihayafuru”, to be held in conjunction with the Kyoto International Manga Anime Fair 2019 (also known as KYOMAF).
The collection is based on an exhibition held in Awara City, Fukui Prefecture in April of this year, with a newly added original drawings corner.
Please enjoy Suetsugu’s descriptive and expressive power of brushwork and story composition.

This exhibition showcases original artwork from the “Chihayafuru” series as well as artwork created in collaboration with each company, and more. In total 130 works will be on display (in rotation), introducing the charms of Suetsugu Yuki’s beautifully colored and delicate art style.

In addition, you can experience the Suetsugu Yuki’s creative world through various exhibits such as viewing hand-drawn sketches and notes in the original drawings corner, and videos demonstrating the production process of key images from the exhibition, which are shown in the atelier corner, a reproduction of the Suetsugu’s studio.

About “Chihayafuru”
The plot revolves around the appeal of the dynamic card game “competition karuta” and a trio of players, the protagonist Awase Chihaya, and Mashima Taichi and Wataya Arata, realistically depicting the youthful enthusiasm of high school students. It is a landmark achievement, which breaks the boundaries of shojo (girls) manga, even gaining popularity among young men.
Serialized in Kodansha’s BE・LOVE magazine from December 2007, the series has won the 2nd Manga Grand Prize award in 2009, was ranked No.1 by “Kono manga ga sugoi! Onna-hen” [This manga is amazing! Women’s Ed.] in 2010, and won the 35th Kodansha Manga Award, shojo (girls) category, in 2011. It has spanned 42 volumes, and over 24 million total copies printed (as of July 2019).
It was adapted into an anime for Nippon TV in 2011 and 2013, with a 3rd series set to begin broadcast in November 2019. In 2016, Hirose Suzu starred in two live-action movie adaptations, Kaminoku (first verse) and Shimonoku (final verse), which were then followed up by a third film in 2018 entitled Chihayafuru Musubi (the knot) that was released nationwide as the concluding chapter, and was a huge hit, with audiences for the complete film series exceeding 4 million viewers.

Suetsugu Yuki
Born in Fukuoka Prefecture.
Won the 14th Nakayoshi Rookie Manga Award for Taiyo no romansu (Solar romance) which she debuted in Nakayoshi Special Edition (published by Kodansha).
In 2007, her series “Chihayafuru” started serialization in BE· LOVE magazine (Kodansha), which won the 2nd Manga Grand Prize award in 2009, and in 2010 was ranked No.1 by “Kono manga ga sugoi! Onna-hen” [This manga is amazing! Women’s Ed.] (Takarajimasha). It also won the 35th Kodansha Manga Award, shojo (girls) category, in 2011.

About Kyoto International Manga Anime Fair
This is Western Japan’s largest manga and anime trade fair. Main exhibitors include various businesses and organizations, which aim to spread and boost the manga and anime industry and educational institutions. Each booth features a display of popular manga and anime series, many events, PR activities for brand-new collections, and special goods sales.