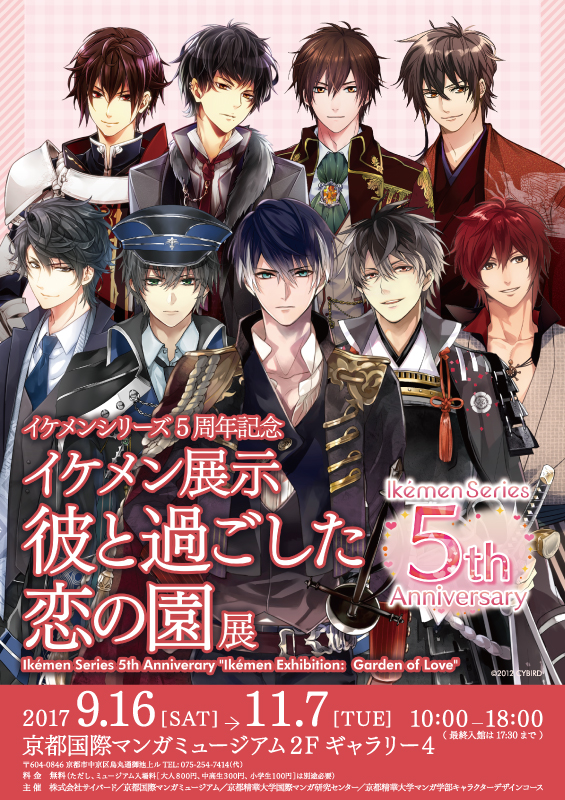 To commemorate the 5th anniversary of The Ikémen Series, the Manga Museum is organizing the exhibition “Ikémen Exhibition: Garden of Love” as a related event for the “Kyoto International Manga Anime Fair 2017”.

We will showcase famous scenes and backstage game production panels from the popular romance smartphone game apps Ikémen Series, distributed by the Cybird corporation (with over 17 million downloads).
Depicted as beautiful illustrations by modern painters who create romantic aesthetics using a variety of techniques, and loved by however many women, the heart-wrenching Ikémen characters can be viewed as literary creations.

*1) ‘Ikémen Series 5th Anniversary Illustration Contest’ was an illustration context held by the communication service pixiv in 2017 from June 14th to July 28th. Artwork (illustrations, manga) were selected which match each of the 2 section themes.

You can find out more about merchandise from here.

There will be more information coming out for a tie-in drinks menu with novelties.

A popular romance game series for ladies by Cybird Co., Ltd., Ikémen Series is in its 5th year of distribution. Currently including 9 titles, the popular romance game app series is played by many women domestically and abroad. The series is based on motifs that everyone adores such as romances with fascinating warlords set in the Warring States period of history, and a Cinderella story set in a European palace. Across all its titles, the series has been popularly received by over 17 million customers, and in recent years has crossed into mixed media such as animation, stage adaptation and character goods.

Established at the start of mobile internet in Japan, Cybird has continued to grow since then, providing various services. A game development company with a focus on smartphones that creates content to support lifestyle’s of abundance, Cybird’s products are currently available on iTunes apple store and Google Play among others; through carrier companies including docomo, KDDI, and softbank; and across platforms such as GREE, mobage, and Ameba.