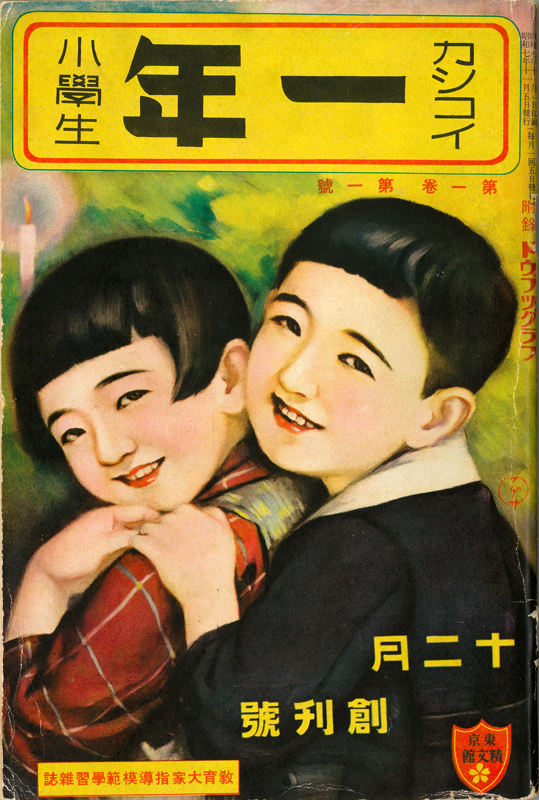 The world of the prewar children’s magazine “Kashikoi”

“Treasure Trove MANGA-ful” is a mini exhibition series curated by Aramata Hiroshi, the executive director of the manga museum, to “trace forgotten ancestors of manga to search the roots of contemporary manga”.
This third exhibition introduces “Kashikoi”, an educational magazine for children published in prewar period, by showcasing the original illustrations and related materials of it.

(1)24 original children’s illustrations which were published on “Kashikoi” *Works will be replaced
(2)Magazines “Kashikoi”, freebies and other published materials by Seibunkan
(3)Manga magazines and books which have manga artists Nakajima Kikuo’s works who was also publishing works on “Kashikoi”

〈Comment from Aramata Hiroshi, Director of Treasure Trove MANGA-ful〉
About 90 years ago, there was a magazine aimed at school children entitled “Kashikoi” (Meaning: wise, clever, smart) that published illustrations for children. The magazine was published for a few years before the world war Ⅱ, then disappeared after that. Unlike the educational magazines published by popular major publishers like Kodansha and Shogakukan, this magazine was unique in that it was the work of a small publishing house, and gathered together the most talented children’s literature authors and illustrators of the time. The magazine also brought together both original and edited material. This discovery was made by Gyoji Chie while residing in Nara, who came across materials collected by Fujimoto Uichi, Gyoji’s grandfather, who had long ago been involved in editing the magazine. It was Fujimoto’s cousin Kitamura Unomatsu who had established the magazines “Kashikoi for 1st Grade Students” and “Kashikoi for 2nd Grade Students” under the publishing company Seibunkan (First published in 1932, Showa 7). This original artwork has been carefully preserved by Gyoji and the Kitamura family.
“Kashikoi” is a predecessor to educational magazines, but the content is very different from modern examples. There are few textbook style aspects. Rather, it was a picture book that fostered the sensitivities of children, with works by famous writers of children’s literature together with beautiful children’s illustrations. There is no wonder that it was a success, with the elite team of artists involved, including the likes of Kitahara Hakushu leading the work on children’s songs, Hamada Hirosuke heading children’s literature, and Hatsuyama Shigeru heading children’s illustrations. Manga was also handled by the popular painters Yokoyama Ryuichi and Nakajima Kikuo, and with that in mind, this picture book style magazine can surely be called a “picture magazine for children.”
Until the appearance of Tezuka Osamu, children’s books and magazines were decorated by ‘illustrations’ created in similar styles to paintings for kids and manga. The artists of that time period are now respected as picture book authors, and their works have been precious to evolution of manga as well. When we looked through our museum archives, we found many books and original drawings by Nakajima Kikuo who had contributed to “Kashikoi” and other magazines, as a manga artist. We can be sure that this exhibition will trigger many future discoveries as well.