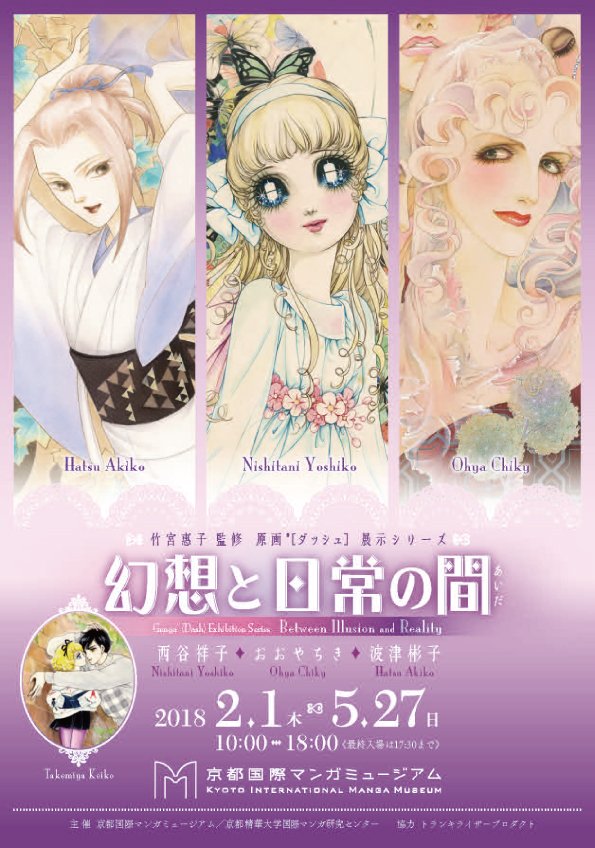 Under the supervision of Keiko Takemiya The Genga'(Dash) Exhibition Series

Between Illusion and Reality

So as to simultaneously preserve delicate manga manuscripts that are easily damaged by fading etc, while allowing public exhibitions, the Kyoto International Manga Museum has been carrying out the Genga'(Dash) project as a research collaboration with the Kyoto Seika University International Manga Research Center, which researches and creates elaborate reproductions of original artwork.
This exhibition in the series showcases new Genga'(Dash) artworks by the three artists Nishitani Yoshiko, Ohya Chiky, and Hatsu Akiko, alongside those of Keiko Takemiya.

A Genga'(Dash) is an elaborate reproduction of an original manga manuscript made through the use of computerized fine color adjustment and printing. It reproduces subtle differences in line shades and color gradation with such precision that the reproduction is almost indistinguishable from the original. Keiko Takemiya, University president of Kyoto Seika University, and author of manga titles such as ‘Kaze to ki no uta’ (The Poem of Wind and Trees) and ‘Terra e…’ (To Terra…), has led the project in the development of techniques to aid in the preservation and public exhibition of delicate manga manuscripts which can easily be damaged by fading. Since its start in 2001, the project has progressed from its base in the Kyoto Seika University International Manga Research Center.

Nishitani Yoshiko
Born in Kochi prefecture, Nishitani debuted in in Shojo Club in 1961 with ‘Futago no tenshi’ (Twin angels). She has published numerous masterpieces including ‘Maryi ru’ (Mary Lou), ‘Remon to sakuranbo’ (Lemon and cherry), and ‘Jeshika no sekai’ (Jessica’s world). With the advent of weekly magazines from the 1960s, Nishitani became one of the artists who further developed the rapidly growing genre of girls’ manga.
Although known as a pioneer for her debut in school manga, she also published works on diverse subjects, ranging from history to science fiction, crossing the established boundaries of girls’ manga at the time.

Ohya Chiky
Born in Gifu prefecture, Ohya used Chinese letters for her surname when first publishing manga, then later changed to writing it in hiragana for her illustration work. In 1972 she debuted in Ribon with ‘Oji-sama ga ippai’ (Full of princes), and went on to charm readers with a great many works including ‘Ojamasan ryuryu’ (Lulu the little trouble maker) and ‘Kaiten mokuba’ (Carousel).
With her delicate and beautiful, unique art style, she has many fans even among manga artists. Since the latter half of the 1970s, Ohya has primarily worked as an illustrator of cover artwork for literary novels.

Hatsu Akiko
Born in Ishikawa prefecture, Hatsu first worked as assistant to her manga artist sister, Kai Yukiko, then after Kai’s death, Hatsu later debuted in ALLAN in 1981 with ‘Nami no banka’ (Elegy of the waves). She published works in Grapefruit, Petit Flower, and other ladies’ magazines, and currently works primarily for Nemuki and Flowers.
Her seminal works, which include ‘Uruwashi no Eikoku shirizu’ (Beautiful England series) and ‘Uryudo yume banashi’ (Uryudo dream tales), are highly acclaimed for their unique world view and brilliant style, as they move back and forth between typical Japanese elements and foreign atmosphere, and the worlds of fantasy and reality.

Takemiya Keiko
Born in Tokushima prefecture in 1950. Takemiya won COM magazine’s New Comer of the Month Prize in 1967, and the next year debuted professionally with ‘Ringo no tsumi’ (Sin of the apple) in Weekly Margaret Supplement. As a member of the Year 24 Flower Group, a group of artist many of whom were born in Showa 24 (1949), she became a leader in girls manga for a new generation, and in 1979 she won the Shogakukan Manga Award in recognition of her works ‘Kaze to ki no uta’ (The Poem of Wind and Trees) and ‘Terra e…’ (To Terra…). She took up a professorship at Kyoto Seika University in 2000, and is presently university president of the same institution, working to train the next generation of talent.