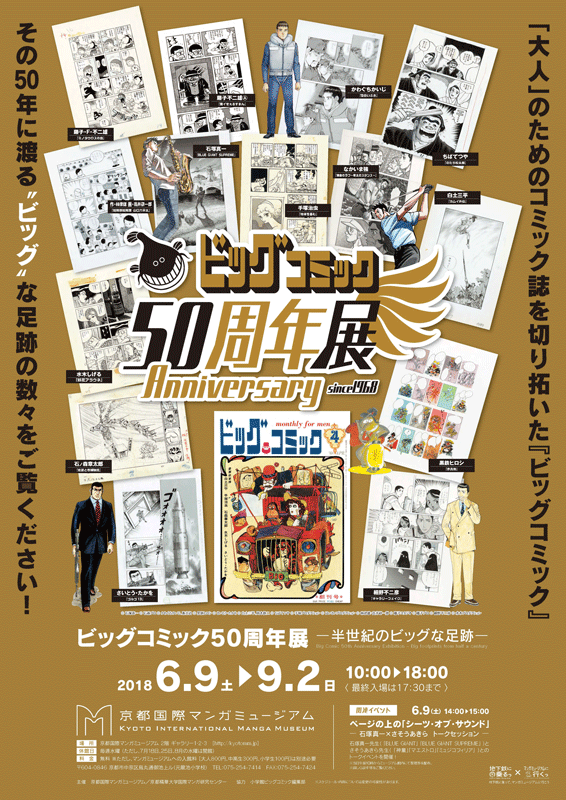 The Kyoto International Manga Museum is honored to hold an exhibition in 2018 celebrating the 50th year anniversary of Big Comic manga magazine, looking back on its history by showcasing about 200 artworks which have adorned its pages over time.

This year, as Big Comic manga magazine (published by Shogakukan) reaches 50 years of publication, we look back at the various artists whose manga have filled the pages of the magazine, along with its history of opening-up the domain of ‘comic magazines for adults’ during an era in which manga was widely expanding as a youth culture. From the literary works of the great masters who carved out their names in post-war manga history, to the diverse portfolios of current artists who spin tales of drama for adult manga readers, this magazine has left an impressive footprint on the post-war history of manga.

The exhibition will include originals of serialized manga from the time of its launch (1968) to the present, replicas of original panel drawings, as well as related materials and magazines, etc.

◆Big Comic 50 years of history Original artwork from manga that have adorned the pages of the magazine since its launch issue, following its journey in 6 parts divided into time periods.

◆Big Masterpieces a la carte Introducing a variety of ‘Big’ works created over 50 years of history, from reader-favorites to bold, ambitious works.

◆Presently Progressive Big Comic Today, Big Comic puts forth various dramas as ‘comic magazines for adults’. We look at the magazine’s present progressive form alongside original artwork from its pages.

First published on February 29, 1968, Big Comic was launched as a ‘comic magazine for adults’ under the policy management of its first editor-in-chief Konishi Younosuke to be a reading magazine that could be appreciated by adults. It has serialized many works which have long been loved by readers, including Saitou Takao’s Golgo 13, Tezuka Osamu’s Hidamari no Ki (A Tree in the Sun), Ishinomori Shotaro’s HOTEL, and Soumu-bu Soumu-ka Yamaguchi Roppeita (Yamaguchi Roppeita, General Affairs Department, General Affairs Section) by Hayashi Norio (story) and Takai Kenichiro (artwork). The magazine is also well known for its covers featuring celebrity caricatures by Higurashi Shuichi and Kaneko Nanpei.

◆Goods (postcards, replica artwork) and related publications, etc. are on sale in the museum shop.
Limited goods information is here