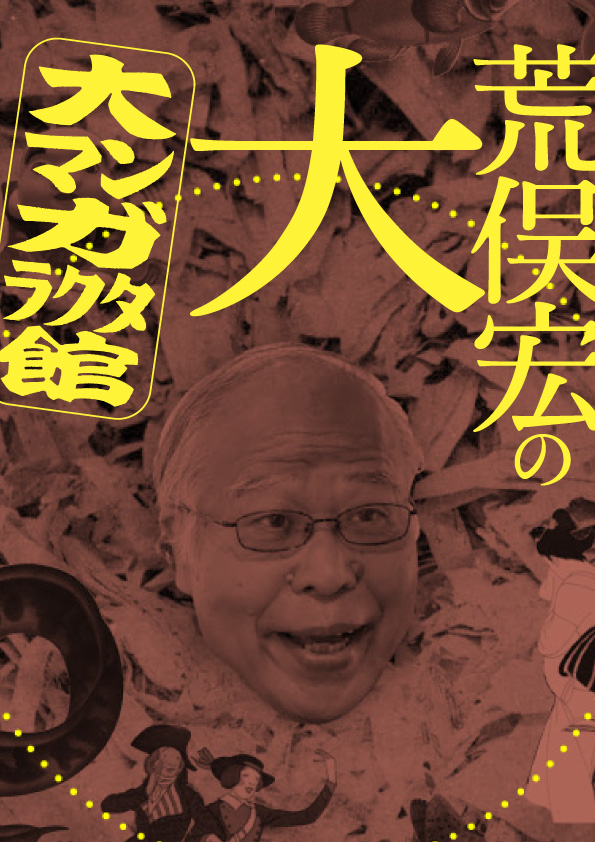 The Kyoto International Manga Museum has an ongoing mini exhibition series called ‘Treasure Trove MANGA-ful’, curated by the museum’s Executive Director Aramata Hiroshi, with the aim of “tracing forgotten ancestors of manga to search the roots of contemporary manga”. The ‘MANGA-ful treasures’, as coined by Executive Director Aramata, include manga that are “as good as buried in the trash unless someone finds them”, and their value is that junk is intrinsically fun.
This exhibition was designed as a special grand version of ‘Treasure Trove MANGA-ful’, produced by Executive Director Aramata himself. In a sense, Aramata Hiroshi has been the director of ‘Treasure Trove MANGA-ful’ since his childhood. We will showcase his personal collections and creations to introduce a life valued by writing and drawing, collecting things, objects, and figures that others have overlooked.

Display corners are named after the titles of publications by Executive Director Aramata.

Introducing Executive Director Aramata and the history of the Aramata family through displays of manga and paintings that influenced Aramata as boy, as well as manga and self-published magazines that he contributed to in his youth.

Since high school, Executive Director Aramata has read a wide variety of foreign literary genres that were largely unknown in Japan, including gothic horror and fantasy literature. These directly influenced his writing later on in life. Here we introduce self-published magazines and other works for which he contributed original stories, and translations with original illustrations.

The ‘Illustrated Guide to Natural History’ series firmly established Executive Director Aramata as a specialist in natural history. This exhibit showcases the beautiful 18-19th Century natural history paintings that adorn these large volumes, and the detailed fish observation journal that suggests he has been a biologist since childhood.

The Bizzare Who’s Who

Introducing Mita Heibonji (1876-1960), a ‘strangely mysterious gentleman’ who has currently caught the attention of Executive Director Aramata. Mita Heibonji was an enigmatic hobbyist, who created a roller skating rink in his own home during the Taisho era, and led a peculiar group of collectors known as the Garakutashuu. We will present a selection of the vast collection of materials entrusted to us by his decedents including his grandson, manga columnist and researcher Natsume Fusanosuke.

Introducing Aramata’s collection of rare prints and originals including popular novel illustrations and other works not generally regarded as “art” such as fashion pictures from 20th Century visual magazines, and pinup girl illustrations.

The Tale of the Imperial Capital

A themed room that displays exhibits related to the novel ‘Teito Monogatari’ (The tale of the imperial capital) that made Executive Director Aramata famous. Exhibits include original manga and illustrations based on the novel, as well as materials related to the film adaptation, directed by Jisouji Akio.

★The (sub)theme of the whole exhibition is: What is the (manga) museum?!

Executive Director Aramata has researched the history of natural history and the chaotic circumstances in which any interesting object was incorporated into collections, including the Wunderkammer (Cabinets of curiosities) and hygienic exhibitions which pre-existed the modern institutionalization of museums. These (pre)museums overlap with the current circumstance in which the subculture of manga has come into contact with museums, begging the question “what is a museum in the first place?”

We are planning talks with manga artists, researchers, and colleagues from his university days.
Once the details are finalized, they will be announced on the Manga Museum website.

To prevent the spread of the Novel Coronavirus (COVID-19), there is a possibility that future exhibitions and events may be postponed or cancelled at short notice. Please check our homepage for details.

Author. Executive Director of Kyoto International Manga Museum.
Born in Tokyo in 1947. Aramata graduated from Keio University, and became an independent professional after 10 years of life as a salaried worker. While working as assistant editor for an encyclopaedia, he wrote the bestselling novel Teito Monogatari (The tale of the imperial capital) which was awarded the Nihon SF Taisho Award. He won the Suntory Prize for Social Sciences and Humanities for Sekai dai-hakubutsu zukan (World Natural History Encyclopaedia), and continues to write prolifically in various fields including occultism, natural science, feng shui, etc. As a writer and translator he has produced more than 350 books.
He is also famous as a collector of rare books.