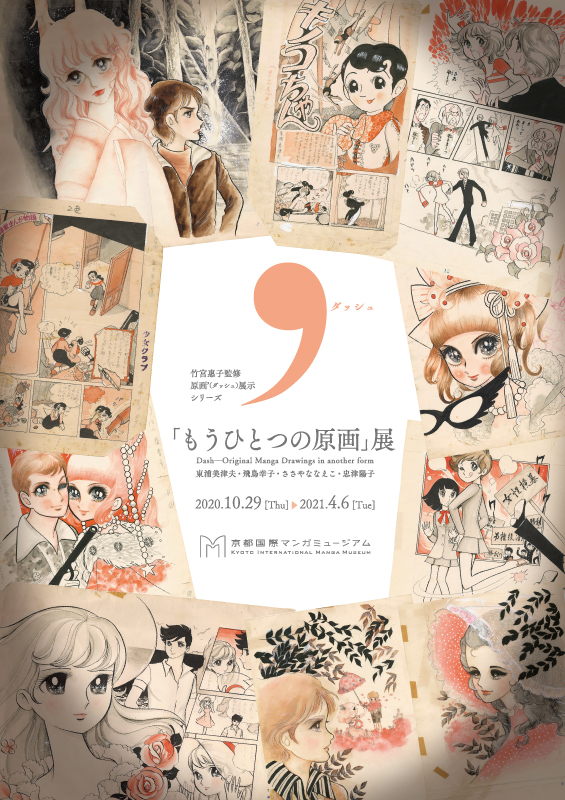 Under the supervision of Takemiya Keiko The Genga'(Dash) Exhibition Series

To celebrate the 20th anniversary of the Genga’ (Dash) project, which is for researching and making elaborate reproductions of original manga drawings, an exhibition will open. This exhibition focuses on the features and significance of Genga’ (Dash), and showcases new Genga’ (Dash).

At Kyoto International Manga Museum, the Genga’(Dash) project has been developing in collaboration with Kyoto Seika University International Manga Research Center, and also with Takemiya Keiko, a manga artist, as the project leader. It is in order to aid in the preservation and public exhibition of original manga drawings, which are delicate and easily fade.

Also other exhibits, such as magazines, will be showcased.

A Genga'(Dash) is an elaborate reproduction of an original manga drawing made through the use of computerized fine color adjustment and printing. It reproduces subtle differences in
line shades and color gradation with such precision that the reproduction is almost indistinguishable from the original.
Takemiya Keiko, the former president of Kyoto Seika University, and author of manga titles such as “Kaze to ki no uta” (The Poem of Wind and Trees) and “Terra e…” (To Terra…), has led the project in the development of techniques to aid in the preservation and public exhibition of delicate manga drawings which can easily be damaged by fading. Since its start in 2001, 850 pieces of Genga’(Dash) by 26 artists have been produced.

After working as a toy designer and Kamnishibai (Japanese style picture show) artist, Higashiura changed his job to manga artist because of Tezuka Osamu’s suggestion. He debuted as a manga artist with “Gekko no kenshi”, an Akahon (cheaply printed manga books at that time). He first worked on some Akahon and rental manga books. Then around 1954, he started to work for shojo manga magazines, such as Shojo, and Shojo Club as well. His manga, for instance “Kinoko-chan” and “Osuzu-chan”, fascinated many girl readers by using very active heroines on adventure. Higashiura passed away in 2012.

Asuka won the 4th Kodansha shonen shojo manga prize with “100ninme no boyfriend” when she was in her second year of high school. She debuted with the same title on Weekly Shojo Friend in 1966. Her representative works, such as “Kaido Komori hakushaku”, “Shiroi Line” and “Frederica no asa” were full of wit, unlike most shojo manga at that time. Her manga style was considered pioneering and it attracted numerous readers. After working for shojo manga magazines and children’s magazines in the 1980s she started a new carrier as an illustrator and is still actively working.

Sasaya made her debut with “Kamome -GULL-” on Ribon Comic under the name of “Sasaya Nanae” in 1970. She is known for describing feelings of characters and has worked on many different themes, such as mysteries and comedy. “Okame hachimoku”, a manga based on her own life with her husband, brought the prize of the 19th Japan Cartoonists Association Award. She also received the Avon Educational Award in 2004 with another manga of hers that is about children abuse. She has been working with the name “Sasaya nanaeko” since 1996.

Tadatsu made her debut with “Natsu no hi no cola” in Bessatsu Margaret in 1967. Mainly from the 1970s to the 80s, she created many popular manga series, such as “Hello, oji-sama”, “Kekkon no joken”, and “Okane tamemasu!”. In addition, another series called “Bijin wa ikaga?” was also made into a TV show. In recent years, she has enlarged her work field, for instance, comicalizing novels from Harlequin Enterprises.

Takemiya won COM magazine’s New Comer of the Month Prize in 1967, and the next year debuted professionally with “Ringo no tsumi” in Weekly Margaret Supplement. She became a leader in girls manga for a new generation, and in 1979 she won the Shogakukan Manga Award in recognition of her works “Kaze to ki no uta” and “Terra e…”. She is a former president of Kyoto Seika University (KSU) and is currently working as the president of Japan Society for Studies in Cartoons and Comics and as an advisor of the International Manga Research Center of KSU.

You can watch the following talk events on the YouTube channel of Kyoto International Manga Museum.