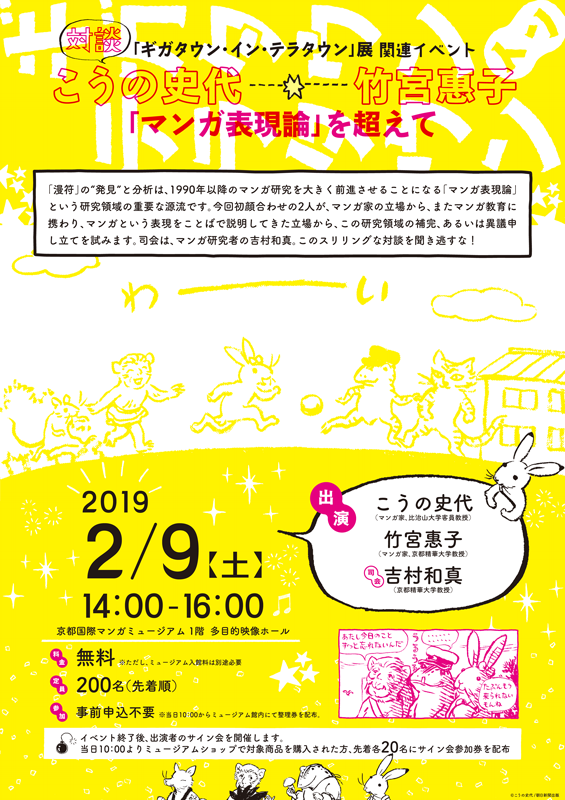 “Discovery” and analysis of mampu is an important source for “theories of manga expression” that have helped manga research to move forward after 1990. Though the two artists have not met before, Kono Fumiyo and Takemiya Keiko are going to complement this research field or make a formal objection to it, as they have expertise about such expressions in manga from their work as educators. Yoshimura Kazuma (a manga researcher at the museum) will facilitate the discussion. DO NOT miss this thrilling talk show!

This event will be held in Japanese only

★Autograph sessions will be held after the talk event. Tickets for sessions will be provided to the first 20 arrivals (for each artist) who bought some of the two artists’ books at the museum shop.

■Kono Fumiyo
Born in Hiroshima in 1968. She made her debut with “Machikado Hana dayori” in 1995. In 2005, she won the 9th Tezuka Osamu Cultural Prize (Creative award) and the 8 th Japan Media Arts Festival Manga award with “Yunagi no machi, sakura no kuni” (Town of Evening Calm, Country of Cherry Blossoms). The same title has also been made into a movie and a TV series. She also got the 13th Japan Media Arts Festival Manga award (Excellence award) with another manga of hers titled “Kono sekai no katasumini (In This Corner of the World)”, that delicately portrays daily life in Kure city in Hiroshima prefecture during the pacific war. An animated film based on the manga (directed by Katabuchi Sunao) has also impressed various audiences. Some of the original drawings of the manga were showcased at the exhibition “Manga and War” at the Manga Museum.
There are many other brilliant works such as “Nagai michi” and “Kokko-san”, which describe daily life in a humorous way, “Heibon club” and “Borupen (Ballpoint pen) Kojiki” that show experimental visual expressions and more.