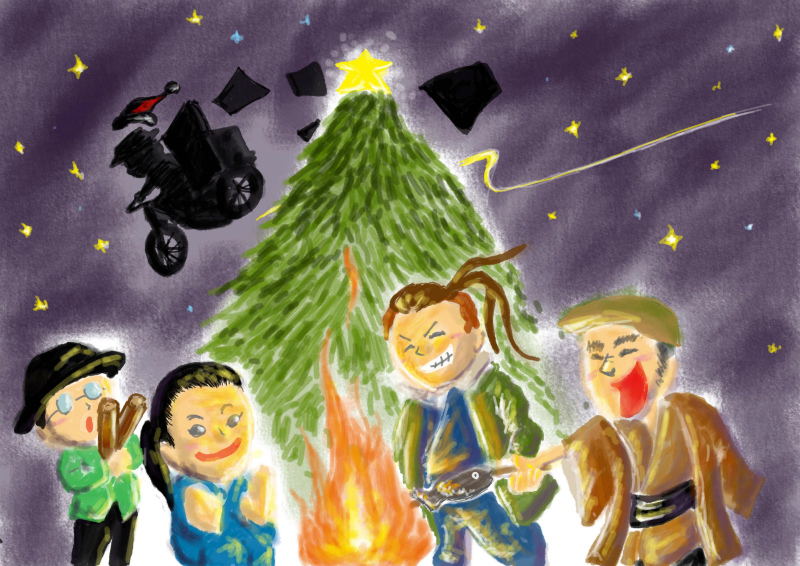 We have so many ways to call the month, December, in Japan.
One of the ways is “Shi-wasu”. It sounds like “she was”.
Anyway, “Shi-wasu” is in 2 chracters; the character “Shi” means teacher, master, monk, and “wasu” means run.  Therefore, “Shi-wasu” can mean “Master runs.”
The word “Master” sounds very old fashioned.
We, Yassan-ichiza, always admire Yassan as our master, and he was always running around.
He was really energetic person, so he tried everything before his too much thinking suffer him from taking action.
One said that his younger day was like a car without its frame but the engine was on.
That can be really true.  I don’t know of his younger day, but it is very easy for me imagining the sight.

One day during Kamishibai, There was a child raising their hands up vigorously for questions.
When he gave the child a turn to answer, the child thought for the answer after own turn to answer came.
Hey, hey, hey, what a guts!  That was how most people reacted for the moment.
However, our master was different.  “There are children who can’t put up their hands to answer even they know what to say.  But you!! You are so brave!!”  He said so and praised the child very much.
Maybe, he saw himself in the child.

Santa Claus gives presents to good children.
Yassan gave presents to not only good children, but also to children who were called weird or bad if it was the right time to.
In the world of Kamishibai, weak points turn to strong points.
None the less, if bad was really bad, we scold children to let them get cold feet.
It is an endless mystery who the Santa Claus really is.  Well, he must be a frightening and funny person.

A month of a running master is coming.
All good, bad, weird and ex-children can come and join in our Kamishibai hut on the 2nd floor.